Government as Platform - An Example 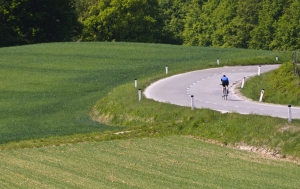 To explain what government as platform is, you can look at an example where it's already the norm such as our public roads. Our three levels of government are involved in the construction, maintenance and regulation of roads. Together they deliver infrastructure upon which we ride our bicycles and drive our cars.

We are used to the idea that we can hop on our bicycle or get in our car and and transport our selves on public roads. As a platform we are left to decide where we are going, when and how to get there. The outcomes of the platform, the actual transportation conducted, is not determined beforehand. The roads are built to certain standards and the drivers are left to figure out how to get from point A to point B.

And because the system is open, people and companies can and do invent innovative new ways to use the platform. Because they are free to choose their route, people optimize the routes they use to get from point A to Point B.  Inventions like automobile GPS are created to help with navigation.  Every year the entire vehicle industry (bicycles, cars, buses) releases new versions of their transportation products and introduces innovative new ones. Several huge industries can rely on the fact that our roads systems is a platform that they can build on.

And for travelers, the system works so well we can travel almost anywhere and we're usually not even aware of which level of government is responsible for which roads. We can even travel to different countries and travel, because all of the public roads work pretty much the same way. Done well, the platform becomes transparent. We don't even notice it.

I am convinced that this what we need with our public data. Our data – all of it – made freely available on the internet, with standard licensing, in formats we can use - would provide a platform for innovation like we've seen with transportation. Entire industries could grow on such a platform, providing jobs and value we can barely imagine right now.

And though only a few people will use the data in the beginning, like the few people building cars and bicycles, those people will create huge value for their fellow citizens all built on a platform managed by our governments.
Posted by Unknown at 7:49 AM

Love the Analogy, used it in my post (with attribution) here:
http://openhalton.ca/2011/07/open-data-and-information/